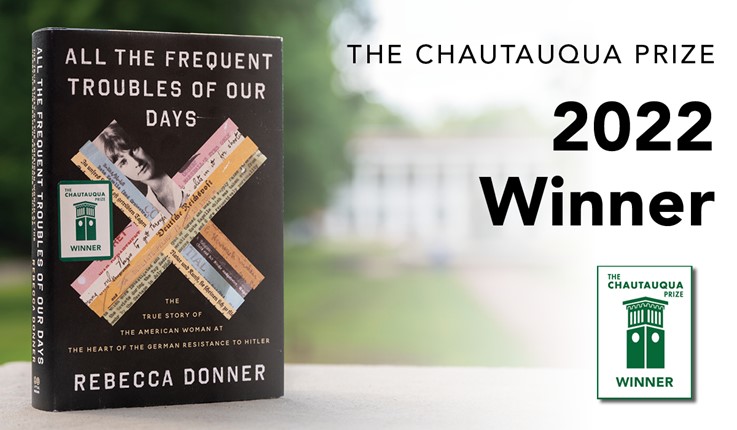 autauqua Institution has announced All the Frequent Troubles of Our Days: The True Story of the American Woman at the Heart of the German Resistance to Hitler (Little, Brown and Company) by Rebecca Donner as the 2022 winner of The Chautauqua Prize.

Awarded annually since 2012, The Chautauqua Prize celebrates a book of fiction or literary/narrative nonfiction that provides a richly rewarding reading experience and to honor the author for a significant contribution to the literary arts. As author of this year’s winning book, Donner receives $7,500, and will be presented with the Prize during a celebratory event and public reading at 3:30 p.m. EDT Friday, Aug. 5, 2022, in Chautauqua’s Hall of Philosophy.

“I am immeasurably grateful to Chautauqua Institution for this honor,” Donner said. “During this fraught time in the world, with authoritarianism worryingly on the rise, the story of Mildred Harnack’s audacious opposition to Hitler is more relevant and urgent than ever.”

All the Frequent Troubles of Our Days: The True Story of the American Woman at the Heart of the German Resistance to Hitler is Donner’s chronicle of the extraordinary life and brutal death of her great-great-aunt Mildred Harnack, the American leader of one of the largest underground resistance groups in Germany during World War II — the only American in the leadership of the German resistance, in fact, yet almost unknown until now. Donner draws on her extensive archival research as well as newly uncovered documents in her family archive, fusing elements of biography, real-life political thriller, and scholarly detective story. Prize readers lauded Donner’s prescient use of the present tense in this “stunning” book of history and biography, calling it a “striking triumph.” “Through exhaustive research and terrific narrative, she breathes new life into biography, creating a book that reads like a suspense drama … and transcends history with a powerful message for our times,” according to one reader. “Explorations into individual courage, the fragility of democracy, the lure of demagoguery, the consequences of economic insecurity, … could hardly be more urgent.”

Sony Ton-Aime, Chautauqua Institution’s Michael I. Rudell Director of Literary Arts, who holds the endowed position named for the man who initially inspired and supported The Chautauqua Prize, described All the Frequent Troubles of Our Days as “one of those rare books that is both extremely important and offers an engaging reading experience.”

“It is truly the kind of book that The Chautauqua Prize was founded to elevate,” Ton-Aime said. “With dazzling prose and innovative storytelling, it reimagines history writing and, frankly, raises the bar for all future historians. Mildred Harnack’s extraordinary life was indeed a saga, and Rebecca Donner, in this epic telling, did it justice.”

Chautauqua Institution President Michael E. Hill shared Ton-Aime’s enthusiasm for All the Frequent Troubles of Our Days, and both Donner’s and Prize readers’ observations on the book’s relevancy and exigency.

“When it comes to history, especially when it comes to humanity’s darkest hours, there are things we can only know in hindsight,” Hill said. “But there are those courageous few who can see with utter clarity looming threats in real time and act. Mildred Harnack was one of those people, and so Rebecca Donner writes not just with the authority of a historian, but with the qualities of one who is inheriting a family legacy, writing with such imperativeness and ‘now-ness’ to sound the alarm in much the same way as her great-great aunt. These are not just the frequent troubles of Mildred’s days, but of our days, and may we all be as brave as her.”

Drawing on both archival research, primary sources — including a series of interviews with Harnack’s young courier, Don Heath — and troves of diaries, letters and photographs, Donner, “in her prose, writes history into the present in the most powerful of ways, reminding us that the past is always with us, there for us as we contend with, and respond to, the challenges of the right now,” said Matt Ewalt, vice president and Emily and Richard Smucker Chair for Education, whose department coordinates the Prize. “It is an honor to celebrate this book, and this author, with our flagship literary prize.”

All the Frequent Troubles of Our Days has won the 2022 National Book Critics Circle Award for Biography and the 2022 PEN /Jacqueline Bograd Weld Award, and was a finalist for the Los Angeles Times Book Prize and the Plutarch Award. The book was also selected as a New York Times Critics’ Top Book of 2021, a New York Times Notable Book, and a New York Times Editors’ Choice, and was named one of the Best Books of 2021 by The Wall Street Journal, Time Magazine and The Economist. A Hebrew translation is forthcoming from Matar Publishing in Israel.

Donner was recently awarded a 2022 Guggenheim fellowship. She was a 2018–19 fellow at the Leon Levy Center for Biography at the City University of New York, is a two-time Yaddo fellow, and has twice been awarded fellowships by the Ucross Foundation. She has also held residencies at Virginia Center for the Creative Arts and Vermont Studio Center. Donner is a member of the National Book Critics Circle, and has taught at Wesleyan University, Columbia University, and Barnard College. Born in Canada, Donner was educated at the University of California at Berkeley and Columbia University. She is the author of Sunset Terrace, a critically acclaimed novel, and Burnout, a graphic novel about ecoterrorism.

The Chautauqua Prize, this year awarded for the 11th time, has been inspired since its inception by the late literary and entertainment industry attorney Michael I. Rudell, and his wife, Alice. Previous winners include The Sojourn, by Andrew Krivak (2012); Short Nights of the Shadow Catcher, by Timothy Egan (2013); My Foreign Cities, by Elizabeth Scarboro (2014); Redeployment, by Phil Klay (2015); Off the Radar, by Cyrus Copeland (2016); The Fortunes, by Peter Ho Davies (2017); The Fact of a Body, by Alex Marzano-Lesnevich (2018); All the Names They Used for God, by Anjali Sachdeva (2019); Out of Darkness, Shining Light, by Petina Gappah (2020); and Having and Being Had, by Eula Biss (2021).

Winners of The Chautauqua Prize are noteworthy for their capacity to open inquiry and create an inviting space for conversation among many different kinds of readers, making the books an ideal vehicle to engage in Chautauqua Institution’s historic tradition of reading and discussion in community. Chautauqua’s other annual literary award, the Chautauqua Janus Prize, celebrates experimental writers who have not yet published a book. Taken together, these prizes ensure that both tradition and innovation live at the heart of a Chautauqua reader’s life of learning.

Details on The Chautauqua Prize are available online at prize.chq.org. Books published in 2022 will be accepted as submissions for the 2023 Prize beginning in September 2022.

All the Frequent Troubles of Our Days: The True Story of the American Woman at the Heart of the German Resistance to Hitler (Hardcover)

All the Frequent Troubles of Our Days: The True Story of the American Woman at the Heart of the German Resistance to Hitler (Compact Disc)