All the Frequent Troubles of Our Days: The True Story of the American Woman at the Heart of the German Resistance to Hitler (Paperback)

Not on our shelves, but we can order this for you!

As the winner, All The Frequent Troubles of Our Days also counts toward CLSC requirements.

In this “stunning literary achievement,” Donner chronicles the extraordinary life and brutal death of her great-great-aunt Mildred Harnack, the American leader of one of the largest underground resistance groups in Germany during WWII—“a page-turner story of espionage, love and betrayal” (Kai Bird, winner of the Pulitzer Prize for Biography)

Born and raised in Milwaukee, Mildred Harnack was twenty-six when she enrolled in a PhD program in Germany and witnessed the meteoric rise of the Nazi party. In 1932, she began holding secret meetings in her apartment—a small band of political activists that by 1940 had grown into the largest underground resistance group in Berlin. She recruited working-class Germans into the resistance, helped Jews escape, plotted acts of sabotage, and collaborated in writing leaflets that denounced Hitler and called for revolution. Her coconspirators circulated through Berlin under the cover of night, slipping the leaflets into mailboxes, public restrooms, phone booths. When the first shots of the Second World War were fired, she became a spy, couriering top-secret intelligence to the Allies. On the eve of her escape to Sweden, she was ambushed by the Gestapo. At a Nazi military court, a panel of five judges sentenced her to six years at a prison camp, but Hitler overruled the decision and ordered her execution. On February 16, 1943, she was strapped to a guillotine and beheaded.

Historians identify Mildred Harnack as the only American in the leadership of the German resistance, yet her remarkable story has remained almost unknown until now.

Harnack’s great-great-niece Rebecca Donner draws on her extensive archival research in Germany, Russia, England, and the U.S. as well as newly uncovered documents in her family archive to produce this astonishing work of narrative nonfiction. Fusing elements of biography, real-life political thriller, and scholarly detective story, Donner brilliantly interweaves letters, diary entries, notes smuggled out of a Berlin prison, survivors’ testimony, and a trove of declassified intelligence documents into a powerful, epic story, reconstructing the moral courage of an enigmatic woman nearly erased by history.

In 2022, Rebecca Donner was awarded a Guggenheim Fellowship. She was a 2018-19 Biography Fellow at the Leon Levy Center for Biography, is a two-time Yaddo Fellow, and has twice received fellowships from the Ucross Foundation. Her essays, reportage, and reviews have appeared in numerous publications, including the New York Times and Bookforum. All the Frequent Troubles of Our Days is Donner's third book; she is also the author of two critically acclaimed works of fiction.Visit her at rebeccadonner.com.

“Extraordinarily intimate… Wilder and more expansive than a standard-issue biography… a real-life thriller with a cruel ending—not to mention an account of Hitler’s ascent from attention-seeking buffoon to genocidal Führer.”—Jennifer Szalai, New York Times

“A powerful book… Ms. Donner’s use of the present tense increases the feeling of inevitability as she unfolds her story to its horrific conclusion... A nonfiction narrative with the pace of a political thriller, it’s imbued with suspense and dread… a deeply affecting biography, meticulously researched and illustrated… Ms. Donner evocatively brings to life the giddy feeling of freedom under the Weimar regime in Berlin and how swiftly it eroded. Her account of the decline of liberties is harrowing.”—Moira Hodgson, Wall Street Journal

“A deeply moving act of recovery… In a photo of those pages reproduced in the book, Mildred Harnack’s cramped yet careful handwriting crystallizes Donner’s goal: to write her heroic forebear back into history, to bring her back to life.”—Bethanne Patrick, Los Angeles Times

“A tour de force of investigation… The story unfolds in fragments… but as the pieces cohere, the couple’s story becomes gripping… The abiding impression is of virtuous, extraordinarily brave people caught up in tragic horror.”—The Economist

“Donner quotes passages from her sources at length, letting the reader dwell on facts rather than galloping through them. She does this stylishly… The archival quality of the book, its enumeration and cataloging of sources, is both surprising for a biography — too rarely the site of literary innovation — and affecting. It gives a sense of the warped timeline of crisis, how life can shift overnight without moving at all, the way in which change can ricochet from the political sphere to the smallest and most mundane details of a person’s life.”—Madeleine Schwartz, New York Times Book Review

“[A] compelling book, which reads like a tragic novel where we wish we didn't know the ending… Yet knowing her terrible fate from the onset shouldn't dissuade you from reading this page-turner about Harnack's perilous journey… Donner's descriptive style takes us inside Nazi Germany and makes the book hard to put down.”—Laura McCallum, Minneapolis Star Tribune

“Remarkable… [a] gripping, inventive biography… Donner’s book is a breathtaking account of how individuals can find the strength to defy the darkness enveloping them.”—Time

“A gorgeous collage of history and family lore, a revelatory window onto a Götterdämmerung that transformed the world forever.”—Oprah Daily

“Gripping… Donner brings her ancestor to life through artful use of documents and interviews… and she tells Harnack's story with dramatic pace and vision. As the story unfolds in time, Harnack and her resistance comrades become like a small cluster of white blood cells targeting the seemingly overwhelming infection that was Nazism.”—Jim Higgins, Milwaukee Journal Sentinel

“[Donner is] a meticulous researcher and master of narrative suspense… Here is a historical biography that reads like a literary thriller.”—Wall Street Journal (Best Books of the Year)

“Highly evocative, deeply moving, a stunning literary achievement. Rebecca Donner forges a new kind of biography—almost novelistic in style and tone, this scholarly work resurrects the courageous life Mildred Harnack, an unsung American hero who led part of the German resistance to the Nazi regime. A relentless sleuth in the archives, Donner has written a page-turner story of espionage, love, and betrayal.”—Kai Bird, winner of the Pulitzer Prize for Biography

“Rebecca Donner has written a beautifully rich portrait of a very brave woman. While never less than scrupulously researched, this biography explodes the genre of 'biography': experimental but achieved, Donner's story reads with the speed of a thriller, the depth of a novel, and the urgency of an essay, like some deeply compelling blend of Alan Furst and W.G. Sebald.”—James Wood

“Moving… From helping Jews escape, to spreading anti-Hitler leaflets, to becoming a spy, to her eventual capture and execution, [Harnack’s] little-known story is finally brought to light by her great-great niece through newly discovered documents, diary entries, survivor stories and more.”—Lesley Kennedy, CNN

“How can it happen that a constitution, a free press, and a democracy be demolished—all within six months? This powerfully written story of Mildred Harnack, resistance fighter against Hitler, tells step by step the way the German republic fell to the Nazis. Read All the Frequent Troubles of Our Days, and be warned.”—Maxine Hong Kingston, winner of the National Book Award, author of The Woman Warrior

“At once boldly imagined and lovingly researched, All the Frequent Troubles of Our Days sets the remarkable story of resistance fighter Mildred Harnack against the backdrop of daily life in Germany as Hitler tightened his grip on the nation. Epic in sweep, written with a novelist’s attention to detail and a historian’s perspective on social and political forces, this book opens up new possibilities for biography.”—Ruth Franklin, winner of the NBCC Award for Biography, author of Shirley Jackson: A Rather Haunted Life

“Combining meticulous scholarship and sparkling narrative brio, Rebecca Donner’s All the Frequent Troubles of Our Days brings to life for the first time the central role played by underground activist Mildred Harnack in Germany’s homegrown opposition to Nazi rule. That Harnack was an American woman from Wisconsin only adds to the complexity of this stirring and tragic story, which culminates in the Harnack group’s ill-fated clandestine campaign to undermine Hitler’s regime. More broadly, Donner’s portrait of the cruelly oppressive system against which Harnack and her circle fought can serve to remind us of what can happen when, amidst economic insecurity and anguish over dislocating socio-cultural change, a highly civilized nation embraces demagoguery over democracy.”—David Clay Large, author of Berlin

“Donner’s meticulous research and novelist’s sensibility make for a riveting biography of a remarkable and brave woman… Readers of Erik Larson’s biography In the Garden of Beasts will appreciate Donner’s different perspective on the same historical events and figures. Recommended to all who enjoy engaging narrative nonfiction.”—Laurie Unger Skinner, Library Journal

"An impressive story... a welcome contribution to the history of the anti-Nazi underground."—Kirkus Reviews 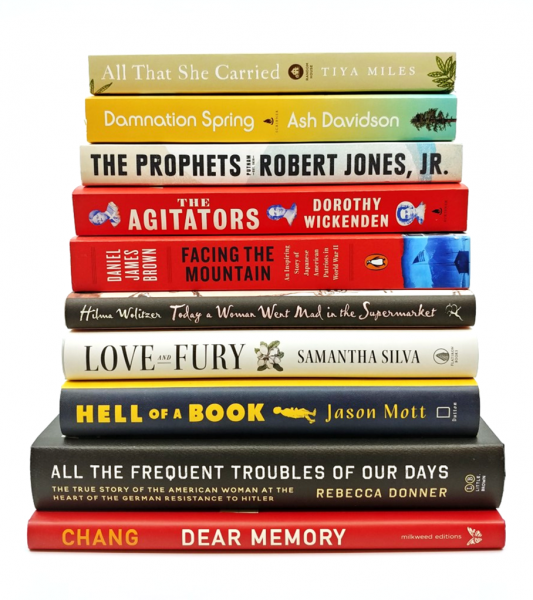 Did you know that current CLSC membership includes book discounts on our website?